10 things science (and Buddhism) says will make you happy 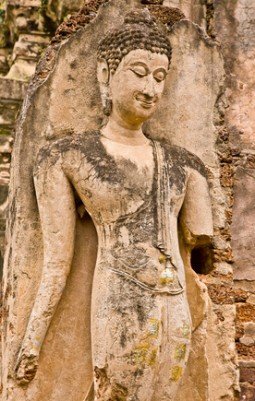 I’m a science geek as well as a Buddhist geek, and recently when I was leading a retreat on how to bring more joy into our lives I found myself making a lot of references to an article published in Yesmagazine, which touched on ten things that have been shown by science to make us happier. It seemed natural to draw upon the article because so much of the research that was described resonated with Buddhist teachings.

So I thought it would be interesting to take the main points of the article and flesh them out with a little Buddhism.

1. Be generous“Make altruism and giving part of your life, and be purposeful about it,” Yes magazine says. “Researcher Elizabeth Dunn found that those who spend money on others reported much greater happiness than those who spend it on themselves.”

And in fact Buddhism has always emphasized the practice of dana, or giving. Giving hasn’t been seen purely as the exchange of material possessions, however; giving in Buddhist terms includes non-tangibles such as education, confidence, and wisdom.

“And which are the three factors of the donor? There is the case where the donor, before giving, is glad; while giving, his/her mind is bright & clear; and after giving is gratified.” (Anguttara Nikaya)

2. Savor everyday moments“Study participants who took time to savor ordinary events that they normally hurried through, or to think back on pleasant moments from their day, showed significant increases in happiness and reductions in depression.”

This of course is an example of another fundamental Buddhist practice — mindfulness. When we’re mindful we stay in the present moment, and really pay attention to our experience. Walking meditation, and even eating, can be ways of savoring everyday moments. In being present, we dwell in the present without obsessing about the past or future, and this brings radiant happiness:

They sorrow not for what is past,They have no longing for the future,The present is sufficient for them:Hence it is they appear so radiant.(Samyutta Nikaya) 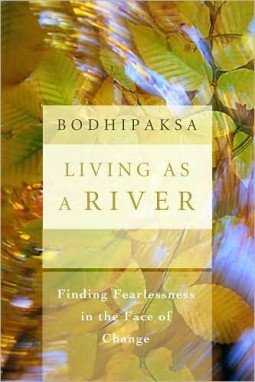 If you're interested in Buddhism and science, you'll probably love my book, Living as a River

3. Avoid comparisons“While keeping up with the Joneses is part of American culture, comparing ourselves with others can be damaging to happiness and self-esteem. Instead of comparing ourselves to others, focusing on our own personal achievement leads to greater satisfaction.”

Buddhists are advised to avoid “conceit.” Now in the west we think of conceit as a sense of superiority, but in Buddhism conceit includes thinking you’re inferior to others, AND it includes thinking that you’re equal to others! What’s left? Just not thinking in terms of self and other at all. The ideal in Buddhism is a kind of “flow” state in which we un-selfconsciously respond to others without any conceptualization of there being a self or an other.

“Though possessing many a virtue one should not compare oneself with others by deeming oneself better or equal or inferior.” (Sutta Nipata 918)

“The more we seek satisfactions in material goods, the less we find them there,” [researcher Richard] Ryan says. “The satisfaction has a short half-life—it’s very fleeting.” People who put money high on their priority list are more at risk for depression, anxiety, and low self-esteem.

Despite western preconceptions to the contrary, the Buddha wasn’t against people making money. In fact he encouraged it! Money’s useful to the extent that it supports our physical needs, allows us to make others happy, and — most importantly — to the extent that we use it to support genuine spiritual practice. In Buddhist terms we validate our wealth creation by giving our money away to support what’s really important in life, which is the pursuit of wellbeing, truth, and goodness. The idea that materialism can bring us genuine happiness is what Buddhism calls a “false refuge.”

There is no satisfying sensual desires, even with the rain of gold coins. (Dhammapada 186) 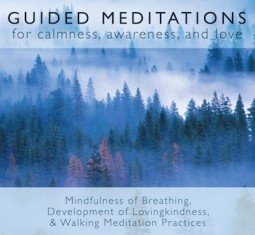 If you're interested in Buddhism and meditation, we have guided meditation MP3s in our online store.

5. Have meaningful goalsAccording to Harvard’s resident happiness professor, Tal Ben-Shahar, “Happiness lies at the intersection between pleasure and meaning.”

The Buddha’s last words were “with mindfulness, strive.” The whole point of being a Buddhist is in order to attain spiritual awakening — which means to maximize our compassion and mindfulness. What could be more meaningful than that?

6. Take initiative at work“How happy you are at work depends in part on how much initiative you take. Researcher Amy Wrzesniewski says that when we express creativity, help others, suggest improvements, or do additional tasks on the job, we make our work more rewarding and feel more in control.”

The Buddhist teaching on work is called the practice of Right Livelihood. And the Buddha saw work as being a way to show initiative and intelligence:

“By whatsoever activity a clansman make his living … he is deft and tireless; gifted with an inquiring turn of mind in to ways and means, he is able to arrange and carry out his job.” (Anguttara Nikaya)

To the Buddha, spiritual friendship was “the whole of the spiritual life.” And even though people tend to think about monks and nuns leaving home, for those who embraced the household life, close and loving relationships with others was highly recommended. “Generosity, kind words, beneficial help, and consistency in the face of events” are the things that hold a family together, according to the Buddha.

Let him associate with friends who are noble, energetic, and pure in life, let him be cordial and refined in conduct. Thus, full of joy, he will make an end of suffering. (Dhammapada 376)

8. Look on the bright side“Happy people … see possibilities, opportunities, and success. When they think of the future, they are optimistic, and when they review the past, they tend to savor the high points,” say [researchers Ed] Diener and [Robert] Biswas-Diener.

Buddhism doesn’t encourage us to have a false sense of positivity, but neither are these researchers. They’re suggesting that we find the good in any situation we find ourselves in. Buddhism encourages positivity through practices such as affectionate and helpful speech, where we consciously look for the good in ourselves and others.

The strongest expression of this is where we’re told to maintain compassionate thoughts even toward those who are sadistically cruel toward us:

“Monks, even if bandits were to carve you up savagely, limb by limb, with a two-handled saw, he among you who let his heart get angered even at that would not be doing my bidding. Even then you should train yourselves: ‘Our minds will be unaffected and we will say no evil words. We will remain sympathetic, with a mind of good will, and with no inner hate. We will keep pervading these people with an awareness imbued with good will and, beginning with them, we will keep pervading the all-encompassing world with an awareness imbued with good will — abundant, expansive, immeasurable, free from hostility, free from ill will.’ That’s how you should train yourselves.” (Majjhima Nikaya)

9. Say thank you like you mean it“People who keep gratitude journals on a weekly basis are healthier, more optimistic, and more likely to make progress toward achieving personal goals, according to author Robert Emmons.”

The Buddha said that gratitude, among other qualities, was the “highest protection,” meaning that it protects us against unhappiness. And:

“A person of integrity is grateful and thankful. This gratitude, this thankfulness, is advocated by civil people.”(Anguttara Nikaya)

To one ever eager to revere and serve the elders, these four blessing accrue: long life and beauty, happiness and power.(Dhammapada 109)

Gratitude in Buddhism helps us to align our being with the good (kusala) so that we’re more likely to live in a way that leads to happiness and wellbeing.

10. Get out and exercise“A Duke University study shows that exercise may be just as effective as drugs in treating depression, without all the side effects and expense.”

And the Buddha said — well, I don’t think he said much about exercise! In a culture like the Buddha’s where most people worked manually, and where walking was the main form of transportation, there wasn’t much need to emphasize exercise as a thing in itself. It’s only in sedentary cultures like ours that people have to make a special trip to the gym to exercise — although they usually park as close to the entrance as possible to minimize the amount of exercise they have to do in order to get to the exercise machines! But walking meditation was, and is, a key practice in Buddhism, even though it’s sometimes done very slowly. However the Buddhist scriptures commonly mention that such-and-such a person was “walking and wandering up and down beside the river for exercise,” suggesting that monks, with their own form of semi-sedentary lifestyle, needed to set aside special time to get their bodies moving.

Monks, there are these five benefits of walking up & down. What five?

One is fit for long journeys; one is fit for striving; one has little disease; that which is eaten, drunk, chewed, tasted, goes through proper digestion; the composure attained by walking up & down is long-lasting.

These, monks, are the five benefits of walking up & down. (Anguttara Nikaya)

‹ Mindfulness up Awareness is freedom ›
Copyright © 2023, Mindfulness in Spain. Theme by Bodhin