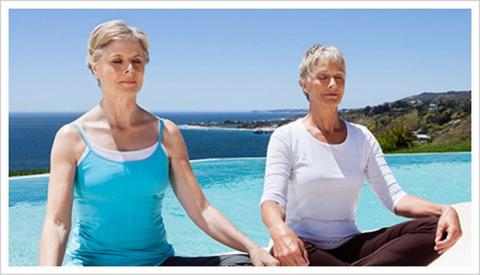 WASHINGTON, November 12, 2012 - Alzheimer’s is devastating and terrifying. Our grandparents are fighting it now, our parents preparing to fight it, and we know that we’re next. A recent bittersweet  NPR piece explained that in order for most currently-conceived Alzheimer’s drugs to work effectively, patients would have to start treatment early-- up to 20 years early.

Most of us, as much as we fear Alzheimer’s, don’t want to take a cocktail of drugs for something that may or may not happen in 20 years. Although there are brilliant scientists and physicians working on helping people with Alzheimer’s (and those who might suffer from it in the future), most of this is theoretical. Fortunately, there are some fairly innocuous, easy and relatively inexpensive things older and middle aged people can do to fight memory loss. One of those things is the opposite of a modern miracle drug—it’s a health practice that’s over 5000 years old. That practice is meditation.

Earlier this year, the Thomas Jefferson University Hospital released a very interesting study. According to Medical News Today, the study showed that meditation can indeed help with memory loss. 15 older adults meditated for 12 minutes a day for 8 weeks, and the results were remarkable. Blood flow increased in key areas of the brain, and cognitive function improved as well. They were less depressed, less stressed and less confused. They were holding on to their memories.

Older people often become depressed and detached as their lives change, and as the world changes around them. Modern Western society is moving in unexpected directions, and it’s doing so at an alarming rate— a rate that some seniors have a hard time keeping up with. All of that stress, confusion and depression can add up to apathy and despair, which can lead to lack of mental engagement and activity. That engagement deficiency is unhealthy for several reasons, but it can also contribute to Alzheimer’s. Meditation is all about nurturing your mind and moving you away from negativity. It makes sense, then, that meditation can fight against Alzheimer’s and improve overall health.

In a Huffington Post piece from last year, Dr. Dharma Singh Khalsa put it succinctly, “…  This cutting-edge [neuroscience] research showed that stress, through the release in the body of a hormone called cortisol, could kill brain cells by the millions and lead to memory loss similar to Alzheimer's disease. For me, this was an epiphany. I remember thinking that, if stress could cause memory loss, then why couldn't anti-stress techniques, such as meditation, stop it from happening?”

Some people, young, old or middle aged, refuse to try meditation. They think it’s a “new age” practice left to those who wear strange clothing and hold séances with their dogs. Meditation is actually good for just about everyone-- it can help with stress, depression, anxiety, blood pressure and cholesterol. It’s free, it feels good and it doesn’t take much time out of the day. Those are huge selling points, especially for the suspicious. The biggest struggle in using meditation as a treatment for current and future Alzheimer’s patients might be getting them to actually try it. What sounds better, though—years of expensive pills or years of quiet, relaxed mindfulness?

If Dr. Khalsa and the Thomas Jefferson University Hospital are correct, it might only take minutes out of our day to fight a debilitating condition. The key, then, to utilizing meditation in the fight against memory loss is in building a daily routine.

The secret to successful meditation is to include it in a daily routine. Similarly, the key to successfully engaging your mind also lies in the realm of consistency. Older people, especially those who are retired, should have no problem adding meditation to their daily lives. Meditation, coupled with some regular social interaction, light exercise and other inexpensive, non-invasive techniques (such as Music for Memory are a gentle way to curb and reverse memory loss. They’re pleasant, productive and healthy—and they also don’t rely on expensive medications.

For middle aged people, finding a routine might be more difficult at first. The trick is finding about 15 minutes of uninterrupted time, preferably first thing in the morning, to sit down to meditate. There are many different meditation techniques available to suit any number of different personalities and preferences. The important thing is that it’s done daily.

Know that meditation is not for other people—it will work for you, and it can help you, especially if you’re worried about memory loss. It also doesn’t ask for anything in return. It’s there when you need it, and it will be ready when you are.

There will continue to be scientific breakthroughs in the realm of Alzheimer’s studies, but one surefire method has already been proven. Meditation might not be an instant cure-all, but it does help and it doesn’t pose any harmful side effects. Alzheimer’s is devastating, but it’s comforting to know that meditation works and that we don’t yet understand its full potential.

The Jefferson Myrna Brind Center of Integrative Medicine’s Dr. Andrew Newberg is extremely hopeful. Speaking with Medical News Today, he said, “This study is one of a growing body of neuroimaging studies to illustrate the neurological and biological impact of meditation, highlighting brain regions that regulate attention control, emotional states, and memory. It is a first step in understanding the neurophysiologic impact of this and similar meditative practices."

We can take the first step anytime we’re ready.

Gordon Richman is a writer and study of American Buddhism. He has been meditating for 15 years, and strongly believes in the value it holds for ordinary people. He enjoys writing about the road to enlightenment and Zen in the internet age.

Tags:
in the press
Copyright © 2020, Mindfulness in Spain. Theme by Bodhin