Can Meditation Make You Smarter? 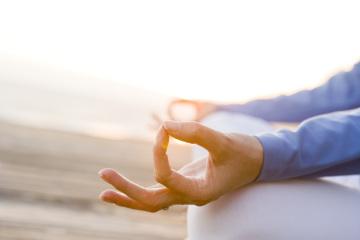 Most of us know that meditating is a great way to reduce stress. But meditative practice goes beyond taking a chill pill. Meditating is also associated with structural changes in the brain that help sharpen focus and improve memory and multitasking skills. But can this mind-body practice really help you get straight A’s?

Smarty (Yoga) Pants — Why It Matters

It’s not just tree huggers and ultra-yogis who meditate. In 2007, about 9% of American adults tried getting into their Zen zones at least once in the past year. Most people say they meditate to manage stress, but meditative practice affects the brain in many other ways.

While people have been meditating for thousands of years, it wasn’t until the 1970s that scientists started focusing on its brainy benefits. Numerous studies suggest that regular meditation (about six hours a week) may actually change brain structure. Scientists have found meditation is associated with a thicker cerebral cortex and more gray matter — i.e., the parts of the brain linked to memory, attention span, decisionmaking and learning. But a year of silent meditation isn’t always necessary. One study found people who meditated at least once a week for four years showed increased cortical gyrification, the folding of the cerebral cortex that helps people process information.

It’s still unclear how meditation actually changes the brain, but some scientists say devoting complete attention to one specific object or thought actually alters our neural networks. And just remember, these studies don’t imply meditating will cause any changes in our brains, just that these cognitive abilities are associated with meditation.

Other research skips the brain scans and suggests some practical benefits of meditation. Om-ing is connected to better concentration and multitasking skills — things some of us might wish for when losing focus on the job. Researchers think meditation helps people deal with interruptions and work on multiple assignments more efficiently. Meditation can also help students battle stress on exam day, possibly boosting their academic performance. But before replacing the GCal with breathing exercises, beware of conflicting scientific findings.

Breathe In, Breathe Out — The Answer/Debate

So what’s the real deal? Meditation may be linked to some short-term perks, like acing a memory test, but scientists have yet to figure out how long the potential cognitive benefits of meditation last. Meanwhile, one study failed to find any correlation between short-term breathing meditation and cognitive abilities like memory, intelligence and academic achievement. And some scientists argue that meditation only has brain-boosting power when we expect to see those kind of results.

It’s also worth noting that there are many different types of meditation, and certain people may benefit more from one meditation style over another. So if you’re looking to get some big results from a little inward reflection, choose a type of meditation you like and feel most comfortable doing. From mantra to mindfulness and Zen to qigong, there are plenty of ways to get that third eye in focus.

Do you regularly practice meditation? What do you find are its best benefits?  Tell us in the comments below.

Tags:
in the press
‹ Becoming Conscious: The Science of Mindfulness up Can Mindfulness Increase Our Resilience to Stress? ›
Copyright © 2023, Mindfulness in Spain. Theme by Bodhin