NHS recognises that mindfulness meditation is good for depression 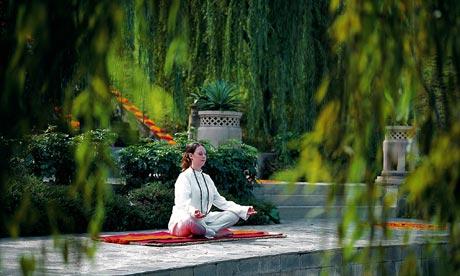 NHS recognises that mindfulness meditation is good for depression

Scientists have now discovered how mindfulness meditation can give patients control over levels of depression, anxiety and chronic pain, says Mia Hansson

The secular meditation courses now being rolled out by the NHS are a lot easier than the one the Buddha taught. Photograph: Guardian

Mindfulness meditation has been shown to give patients control over their own depression and anxiety levels and levels of chronic pain, according to a paper published earlier this month in the journal Frontiers in Human Neuroscience.

Previous studies have found that mindfulness meditation can cut the recurrence of depression by 50%, and neuroimaging scans have shown significant positive change in brain activity of long-term meditators. But while scientists knew mindfulness was having an effect, they have not known how until now.

Catherine Kerr, lead author of the new study and director of translational neuroscience for the contemplative studies initiative at Brown University in Providence, in the US, says that when we are depressed, attention is "consumed by negative preoccupations, thoughts and worries". Instead of disengaging and moving on, we find ourselves digging deeper into negative thought patterns.

Mindfulness gives patients control over this habitual chain via a "body scan" technique, where patients systematically engage and disengage with the sensations in each part of the body. As they do so, alpha rhythms, which organise the flow of sensory information in the brain, increase and decrease. Kerr describes this as a "sensory volume knob" and it is this flexible focusing skill which, the paper proposes, "regulates attention so that it does not become biased toward negative physical sensations and thoughts, as in depression". Early Buddhists advanced a similar theory 2,500 years ago in a famous practice text called "Mindfulness of the body and breath".

I came to mindfulness on a 10-day Buddhist meditation retreat in Thailand. Letting go of thought felt as impossible as tearing off a limb; particularly when the leg and back pains started from sitting cross-legged.

Years later, I came to see that it was unacknowledged emotions that gradually manifested as pain, on an emotional and sometimes physical level. Turning towards them, and accepting them fully, helped to resolve them.

Thankfully, the secular antidote that the NHS has rolled out is far easier than the one the Buddha taught. You don't have to sit cross-legged, and the sessions, usually run by a clinical psychologist, take place once a week over a period of eight weeks.

Having recognised the health and cost benefits, some NHS trusts accept self-referrals, others accept referrals via GPs. The Mental HealthFoundation, which has produced a list of some of the NHS-funded courses, estimates that as many as 30% of GPs now refer patients to mindfulness training.

However, these programmes are often bundled under "talking therapies" treatment, such as cognitive behavioural therapy (CBT), which is misleading since talking is exactly what mindfulness practitioners aren't doing.

Tags:
articles
‹ Mindfulness Means Keeping Things Simple, by Vishvapani up Oxytocin: Go Out and Touch Someone ›
Copyright © 2022, Mindfulness in Spain. Theme by Bodhin