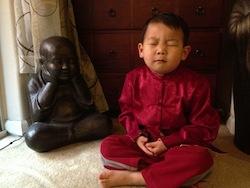 Many more women than men enroll in mindfulness and compassion training courses. How can we change that?

The men are gone.

That’s what I realize on the last class of the Cultivating Compassion Training (CCT) course at Stanford University. We’ve spent nine weeksstrengthening our attention, building awareness of our bodies, and learning to confront pain in ourselves and in others—and throughout the course, male students were dropping out like 12th-seeded teams in the NCAA basketball tournament. This gender imbalance was not unique to Stanford’s CCT. Two-thirds of students at the Insight Meditation Center in Redwood City, California, are female, according to teacher Gil Fronsdal, an ordained Soto Zen priest who was also a Theravada monk in Burma. Elad Levinson, the director of programs at Spirit Rock Mediation Center, says, “The sociodemographic of Spirit Rock consists of primarily women.”

All of these programs integrate mindfulness meditation—the practice of focusing attention on our thoughts and feelings without judging them. That might not sound like much, but study after study finds that practicing mindfulness can bring a host of physical, psychological, and social benefits. More recently, evaluations of programs like CCT are finding that mindfulness is a very effective way to cultivate compassionate intentions and behaviors.

Is that something that boys and men need? “Men tell you what is on their minds, but not what is in their heart,” says Levinson, who has 40 years of psychotherapy and 20 years of leading men’s groups under his belt. Perhaps not coincidentally, boys and men commit the vast majority of violent acts, from domestic violence to murder. Many struggle with expressing empathy and compassion.

The problem does not seem to center on mindfulness. Men practice high levels of mindfulness in a variety of arenas in our society. At military boot camps and police academies, men learn to control their breathing and focus on a target before firing a weapon. Sports are a great training ground for mindfulness: Basketball players are taught to clear their mind by going through a routine when shooting a free throw. Being in “the zone” is active meditation in its highest form.

Notice, however, that in all of these mindfulness practices, compassion is removed from the equation. These boys and men are being trained for win-or-lose competition. “It has been historically dangerous for a man to be vulnerable,” says Elad Levinson, who suggests that men’s resistance to explore interior emotions like compassion is the result of hundreds of years of conditioning.

While some argue that this is the result of a biological predisposition, contemporary research inneuroplasticity, by scientists like Richard Davidson at the University of Wisconsin, Madison’s Center for Investigating Healthy Minds, finds that even short-term compassion meditation training (30 minutes a day for eight weeks) alters the brain activity in regions associated with positive emotional skills like empathy. That is true for both men and women. As Davidson says, “Compassion is indeed an emotional skill that can be trained.”

We understand the benefits. The need is there. But how do we get men to participate in mindfulness and compassion training? Here are five ways to plant the seeds of compassion in boys—and cultivate its growth in men.

1. Use pop culture to teach mindfulness to boys

When my wife and I tried to teach our sons how to meditate, they immediately sat down “crisscrossed apple-sauce” and closed their eyes. “What are you thinking about?” I asked my five year old. “Inner peace,” he replied.

It turns out that he learned this technique from Po in the movie Kung Fu Panda. I wasn’t surprised: One of the reasons I was attracted to meditation at an early age stems from my love of the Japanese anime Ikkyu-san, based on the historical Zen Buddhist monk.

“If every eight year old in the world is taught meditation, we will eliminate violence from the world within one generation,” says the Dalai Lama. Some might argue with that point, but given research showing how mindfulness meditation leads to greater compassion, perhaps portrayals of meditation in action belong in the Netflix queues of young children.

Shows like Kung Fu Panda and Avatar: The Last Airbender feature characters that gain power—as well as peace of mind—through meditation. The Jedi Knights of Star Wars consistently preach mindfulness to each other, specifically as a way to foster compassion and restraint.

Parents can watch these hugely popular movies and shows with their kids and discuss the real-world roots of these practices.

2. Give boys role models of mindfulness and compassion

I meditate every day. Sometimes I meditate in my sons’ bedroom, which gives them a sense of security. “Daddy, will you ‘medtate’ in our room, please?” is a common bedtime request of my three year old.

Our sons also practice Kristen Neff’s self-compassion techniques daily. Whenever they say, “thank you,” they put their hands on their hearts and bow deeply. My wife and I want them to connect with what Bruce Lee calls the “emotional content” of their actions. Some parents at our son’s kindergarten have noticed this pose of gratitude and taught their children the gesture.

Although these actions seem trivial, research in neuroplasticity has shown how the consistent daily practice of any activity alters the brain structure of the practitioner. This is a matter of building habits—ones that will hopefully last a lifetime.

3. Start with boys in school

In a world where bullying, school shootings, and sexual violence threaten all our children, isn’t it about time that compassion training became part of the curriculum of every school? Vinny Ferraro (center, wearing hat) of the Mind Body Awareness Project leads a workshop at a juvenile hall in the Bay Area.

The Oakland-based Mindful Schools program takes training straight to the kids. Co-founder and co-director Megan Cowan has shared a story about how a mindfulness training she led in an inner-city school engendered compassion in the students for victims during a lockdown.

These programs are springing up all around the country, as Jill Suttie describes in “Mindful Kids, Peaceful Schools.” There’s also Stressed Teens in Oakland, BREATHE in Pennsylvania, the Holistic Life Foundation in Baltimore, InnerKids in Los Angeles, the Impact Foundation in Colorado, and the Lineage Project in New York City. Many of these programs teach mindfulness to at-risk and incarcerated teenagers.

Scientific evaluations of many of these programs are finding that they boost academic achievement and reduce behavioral problems. As Congresman Ryan writes:

These people and many others all over America and the world are changing the way we approach chronic poverty and disconnection. These programs reveal to our children that a negative and dangerous life is not their only option. With mindfulness skills they see that they have choices and the wherewithal to overcome the adversity in their lives. As these programs grow and lead to deep, systemic change, our country will be a safer and healthier place because of it.

4. Meet men where they are

Rather than try to get a few good men to attend compassion training, why don’t we find areas where men are a captive audience, and teach compassion there?

Mindfulness meditation has already been incorporated into the US military’s Marine Corps. At the Quantico, Virginia base, soldiers are offered an eight-week mindfulness course in order to better deal with anxiety, stress, depression, and insomnia. “I can’t think of any aspect of my life that it hasn’t helped me with,” reports Major Jeff Davis.

Mindfulness programs are also working in prisons. The Prison-Ashram project, started in 1975 by Bo and Sita Lozoff with Ram Dass, has lead thousands of meditation workshops in more than 500 prisons. They also distribute free books and audio CDs to any inmate who requests them. Bo Lozoff’s book, We’re All Doing Time, which covers yoga, pranayama, and Tonglen meditation, has become “the convict’s Bible.” Bo, who passed away in late 2012, claims that every inmate in prison has one thing in common: “A lack of compassion.”

“Change really can happen,” says Sita Lozoff, reflecting on three decades of teaching mindfulness practices to prison inmates. “You become more peaceful.” When asked about how to get more men who are not incarcerated to practice mindfulness and compassion training, Sita simply stated, “Change the role models to make compassion something attractive.”

“Prisoners are such great role models for the rest of us,” says Jenny Phillips, director of the Dhamma Brothers, a documentary about the beneficial effects of Vipassana meditation practices administered in an overcrowded, understaffed, maximum-security prison for men outside of Birmingham, Alabama. “The Dhamma Brothers suggests the possibility of freedom from that which imprisons us all,” writes Phillips in her director’s statement.

Phillips plans to release free teaching curriculum for schools to teach The Dhamma Brothers. The curriculum includes not only guides to teach and discuss the film and its companion book, but also experiential exercises on mindfulness, meditation, and cultivating loving-kindness.

Catching boys in the home, children at school, kids in front of the flat screen, and adults in institutions might just start a revolution that will end the gender imbalance of compassion.

Learn more about mindfulness and the science behind it.

How mindful are you? Take our quiz!

Finally, we might try to make mindfulness and compassion training more attractive to men.

Part of the struggle is to simply encourage men to lead other men into mindfulness. “Men tend to go deeper when they are not with women,” claims Elad Levinson. Gil Fronsdal notes that when he taught a meditation retreat without a female co-teacher, his gender ratio sometimes reached 50-50. So maybe having male teachers leading a class for men-only would help.

We can use examples of mindfulness in military, sports training, and popular culture in order to illustrate the concepts and build credibility among men. Levinson argues that compassion trainings need to be “culturally relevant, delivered by credible people who can relate to men, and learning accessible.”

Self-Compassion pioneer Kristen Neff tells a story about how Chris Germer, who co-developed Neff’s self-compassion workshop with her, teaches a male version of her active self-soothing technique. While Neff gently puts her hands over her heart as an example of self-soothing, Chris Germer adapts the hip-hop gesture of thumping a fist on one’s chest over the heart.

The trouble, of course, is that this type of gesture doesn’t appeal to all men—and catering to male culture can be gimmicky or even part of the problem, if taken to extremes. We are just starting the discussion about how to involve men in mindfulness and compassion training, and we are still struggling to discover a language of the mind and the body that can lead them toward mindfulness.

Tags:
articles
‹ Finding Freedom through Chronic Pain up Get out of the war ›
Copyright © 2022, Mindfulness in Spain. Theme by Bodhin